5 Most Common Mistakes When Cooking Quinoa 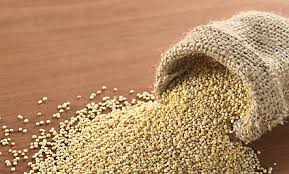 Written by Danielle Walsh
Most people have enough trouble pronouncing quinoa (it’s KEEN-wah, btw) let alone cooking it. Now that you know how to say it, preparing it can still be tricky (at least one of the folks on staff here had trouble with this super-healthy seed from South America). So we talked to our Test Kitchen team to find out what we were doing wrong.
1. Thinking It’s a Grain
The first mistake people make is thinking that quinoa is a grain. It’s actually the seed of a grain-like crop closely related to beets. Maybe this isn’t a “cooking tip” – but you should always know what you’re eating.
2. Skipping the Rinse
Rinse it well! There is a bitter coating on the tiny seed that needs to be rinsed away; if you don’t do it, it’s going to taste wrong. And when you rinse it, use a fine-mesh strainer. You don’t want those tiny seeds to disappear down the drain!
3. Overcooking It
Nobody likes mushy quinoa! Here’s the way to do it: Combine 1 cup quinoa with 2 cups water in a medium saucepan. Bring to a boil. Cover, reduce heat to low, and simmer until quinoa is tender, about 15 minutes.
4. Forgetting to Drain It
Quinoa holds lots of water, so you have to make sure you drain it thoroughly after it’s cooked. Otherwise, it will make your whole dish watery. And don’t forget to use that fine-mesh strainer again!
5. Not Letting it Rest
Return the quinoa to the pan after you drain it, then cover and let sit for 15 minutes. Letting the quinoa rest in the hot saucepan after boiling/cooking dries it out, so you don’t end up with clumpy/wet quinoa. It’s light and fluffy!–Kay Chun, Hunter Lewis, and Janet McCracken
Bonus Tip! Try making quinoa as you would risotto. Saute some onions in olive oil, then add quinoa (rinsed!) and toss to coat with oil. Begin adding warm liquid a bit at time, stirring frequently, until it’s creamy and cooked through.–Mary Frances Heck